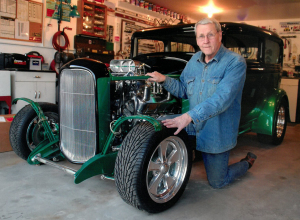 Ronald J. Laske, age 75, of West Fargo, ND, died peacefully at his home on Wednesday, June 19, 2019, under the care of his wife Shirley, and Hospice of the Red River Valley.

Ronald James Laske was born February 9, 1944 at St. John’s Hospital in Fargo, ND, to Victor and Maxine Laske.  He grew up in rural Durbin, ND, and attended country school.  Ron loved animals, and as a young boy, enjoyed raising several different animals on the family farm.  His family eventually moved to Fargo, and later to Moorhead, MN, where he attended high school and lived for many years of his adult life.

Ron was an avid “car guy”.  He loved building and racing late model stock cars, and for many years could be found behind the wheel of his Car #30, competing on all the local area racetracks.  He also enjoyed restored automobiles and was very proud of his restored and customized 1932 Ford 2-door sedan.  Ron and Shirley loved traveling and camping together in their motorhome.  They traveled to several annual car shows such as Devils Run at Devils Lake, ND, and Back To The 50’s at St. Paul, MN.  Ron was a member of Swanks Car Club, Casselton, ND, and of Bethel Church, Fargo.

Ron is also survived by two older sisters, Bonnie (Al) Moody, Dewey, AZ, and Bette Odegard, Marshfield, WI, along with several nieces and nephews, and his mother-in-law Mildred Haugland, Fargo.  Ron is preceded in death by his parents, Victor and Maxine.

To send flowers to the family or plant a tree in memory of Ronald J. Laske, please visit our floral store.