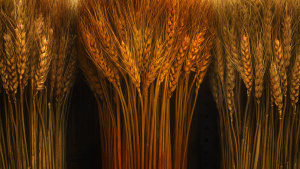 Roy Faught Jr. was born June 15, 1914 on the family farm near Absaraka to Roy and Leona (Rider) Faught. At age 12, his dad died and his mom and brothers continued the farming operation. He graduated from Lincoln High School in Casselton in 1932. Roy married Dacotah Dickinson on January 17, 1936 at Moorhead, MN. They made their home at Absaraka where they operated the Faught Mercantile and Minneapolis Moline dealership until January of 1942. They moved to Havre, MT for a year before moving to Minneapolis, MN where they operated a residential grocery store. While there Roy also worked at a Minneapolis Moline factory.  They returned to Absaraka in 1944 where they farmed for many years. In 1958 Roy served as a director for the newly incorporated Abasaraka Cooperative Telephone Company.

Roy was a conservationist – serving on the local soil conservation board and the National Association of Conservation Districts. He served on the Absaraka School Board and was one of the first members of the Cass County School Officers Board. Roy was a 4-H Leader, a member of the Farm Bureau and played an active role in the start of Nodak Mutual Insurance. He served on the Red River Valley Fair Board for over 60 years and also served as its president. He also organized field demonstrations at Big Iron for 29 years. He was active in Absaraka Methodist Church. Upon closure, they joined the Westminster Presbyterian Church in Casselton. In 2013 Roy published a compilation of his life’s history entitled, My Admissions ‘The first 99 years."

He was preceded in death by his parents, wife and two brothers, Richard and John.

Visitation: Thursday, Oct. 31, 2019 from 5 to 7 PM with a prayer service at 7 PM at the Westminster Presbyterian Church, Casselton.

Funeral: Friday at 11 AM at Westminster Presbyterian Church with visitation one hour prior.

To send flowers to the family or plant a tree in memory of Roy Faught, please visit our floral store.