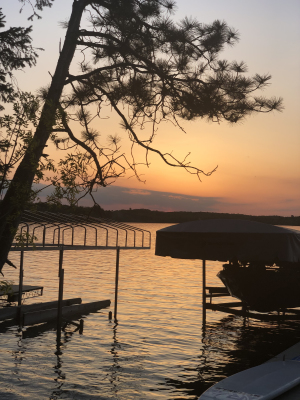 Robert “Rob” Francis Schmaltz, 56, of Casselton, ND passed away on Sunday, August 4, 2019 at Sanford Health Palliative Care, surrounded by his loving family, after a courageous battle against gastric cancer.

Rob was born the fourth of five children to Francis and Marcella (Mayer) Schmaltz on April 1st, 1963.  He attended grade school in Anamoose. He graduated in 1981 in the top 10 of his class, which only had 16 students..

On June 19th, 1987, Rob married the love of his life, Joyce (Muscha). Together they brought 2 children into this world, Adam and Kelsey. Rob loved his family with his whole heart and beamed with pride at their accomplishments, even if it was inappropriate karaoke songs.

Rob had a zest for life that was contagious and a smile for everything he did. When summer came, he could be found at the lake driving the pontoon, fishing with his grandson Hunter, golfing, and riding his Harley. He made many memories taking the ride to Sturgis with friends multiple times. His favorite time of year was the fall. It meant one thing, Bison Football. He loved watching the Green and Gold and celebrating all their victories. In the winter, Rob was either watching Sioux hockey, or making the trip home to Harvey to hunt with his Father-in-law Ben, and his many brothers-in-law.

The most important things to Rob were all of his “families.” At Gateway Chevrolet his work family grew as he held many different titles over 30 years of work, most recently the position of New Car Inventory Manager. Little did he know after purchasing Dusty’s Tavern in Casselton, ND, (a moment many joked was a mid-life crisis) he would gain another family.  In ten years of ownership of Dusty’s Tavern, Casselton became their home.

He was preceded in death by his father Francis, step-father Larry Nuddell, grandson, Oliver, and brother-in-law Craig Muscha.

Rob’s final request was “Do not have any tears.” Instead, grab yourselves a cold bud light, and give him a Cheers!